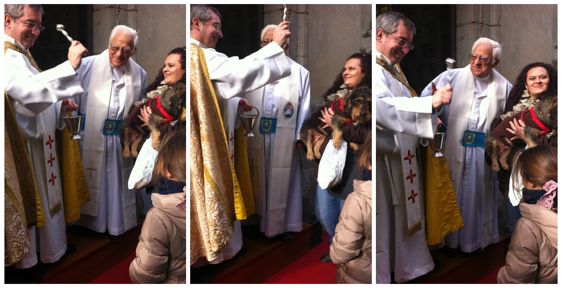 Of all life’s difficulties, there is nothing that causes more trouble and strife than working with children or animals. Spare a thought for Padre Ángel García Rodríguez organizing the day of San Anton in Madrid who has to do both.

Even for Spain, which has its fair share of weird and wonderful festivals, the elaborate nature of this celebration is unique. Pets, priests and musicians gather to honour the companionship between animals and humans. The tradition has morphed from its origins as a medieval pilgrimage, when horses were taken to be blessed before setting off on a long journey, into somewhat a reversal of that today – as pet owners now make the long journey across the city to receive a blessing.

As the nominal owners humans certainly do their best to keep their pets on a leash, figuratively and literally speaking. However the amount of strife involved in looking after an animal made me wonder who has the most troublesome time the pet or the owner, and which pet is the most difficult to look after? I went down to the church to find out.

The day of San Anton doesn’t quite reach the status of Noah’s Ark, but there is certainly a great variety of animals. Living up to their status as man’s best friend the dogs submit to the blessing with only minor protests, even if some are tested to the limits of their patience as they are dressed up in costumes. Whilst it must be extremely troublesome for the owners to keep their dogs still enough as they file past the altar, there must definitely be a sense of divine justice for the priests. Dogs are always urinating in front of the church, but this is the only day of the year the clergy gets to pass water back over the canines. 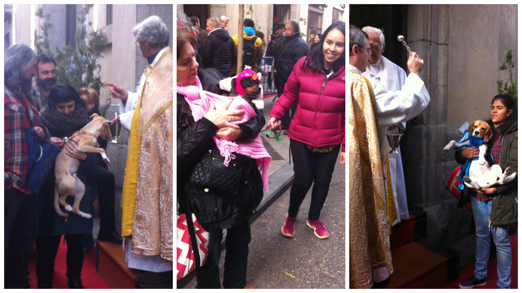 However some people bring cats. The only courteous behavior that a cat normally indulges in is reminding you that the litter box is full by leaving a present in the middle of the kitchen floor. Can you imagine putting a cat into one of the little jails (I know they’re called cat carriers and various other things, but cats don’t believe that and neither should you), hauling it across the city, to finally be covered in the substance they hate most in the world, water. No nor can I. The technique for getting a cat to participate seems to be holding it by the neck so it can’t escape. Major kudos to this guy who has obviously had a lot of experience and is now able to apply it to two cats at the same time. 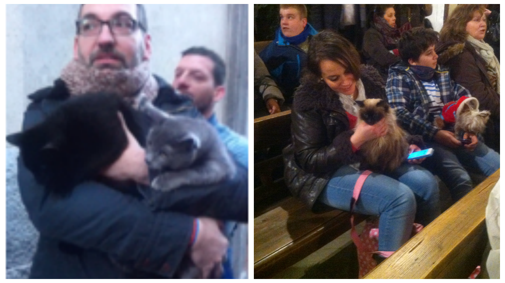 Horses probably seem the most trouble free of the animals, as they're trained to deal with crowds and are seemingly unruffled by the trumpeters on their backs. 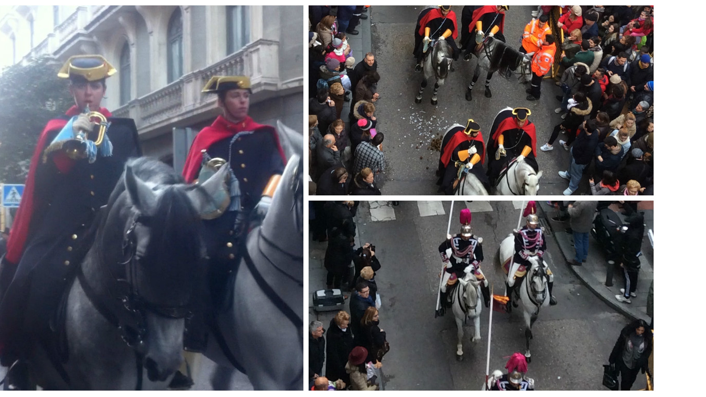 However this guy might disagree as cleaning up after them is quite a task! 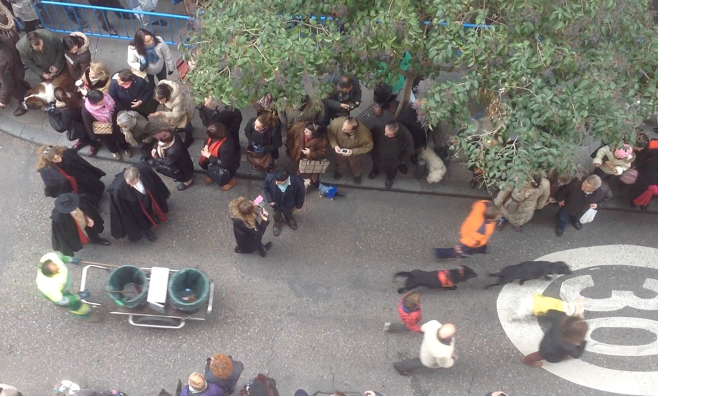 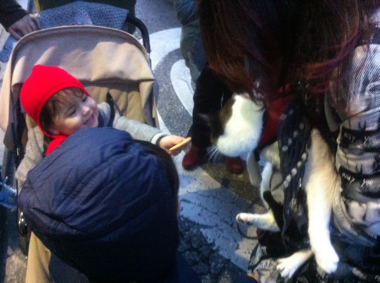 Is it difficult to bring your cat here? No! I bring him everywhere, the day of San Anton, the park, the beach…

The beach? Yes, he likes the beach a lot.

Really? Honestly! He comes with us on all family trips, the beach the park…everywhere.

And he never complains? No! He really likes it. The beach is his favourite place.

Does he enjoy eating biscuits too? Well they’re not his favourite food, but he’s really social, if someone is trying to feed him…well he’s curious so basically he’ll eat anything.

Difficulty rating 7/10: Ana was definitely creating a great deal of strife for her cat. Despite what she said about having the perfect travelling companion, the scratch marks on her hands indicated that she wasn’t quite telling the whole truth. 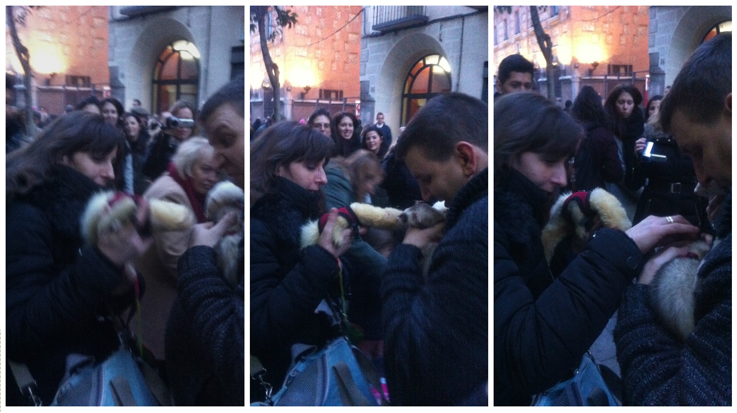 Raul. Is it difficult to bring your ferret to the day of San Anton? Yes, he’s already bitten me twice.

And how long have you been here? Around 10 minutes.

Ok! So is it really worth it bringing them all the way here? Definitely. You meet a lot of people, the atmosphere is great…and it only happens once a year. I come every year.

Every year? Yeah, every year.

And what was the best year? Well they’re all good and I like the other animals too, but it’s better when a lot of ferret owners turn up. You can swap experiences and advice, things like that.

Difficulty rating 6/10: Although Raul had been bitten, and it looked like he would be bitten several times again before the day ended, both him and his ferrets were clearly equally enjoying the day out. Although the relationship between human and ferret is troubled, both Raul and Elisa (who hadn’t met before the day started), and their ferrets (who I assume hadn’t met either) really seemed to relish the opportunity to mingle. 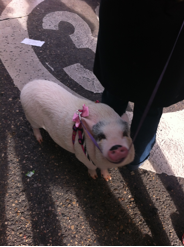 Hi, Tomás. Is it tricky getting your pig to the church? No not at all, I only live a couple of streets over, so it’s not far at all. When she was younger it was a problem, because aggressive dogs can attack pigs, so it’s very worrying when you take them out for a walk. Fortunately I’ve never seen anyone with a mean dogs round here, so I’ve never actually had anything to fret over.

Great! And I see she’s getting plenty of attention... When I was younger I didn’t have any pets, so I had to play with other peoples, dogs that I’d see in the apartment block. Sometimes I felt shy as you don’t always know if someone is ok with you playing with their dog. Having a pig is great because it’s such a novelty that no one feels nervous about coming up to play her. The Day of San Anton is a perfect example of that.

Is she difficult to keep? Not at all, well she does eat a lot but in general she has a great docile personality like most pigs.

Difficulty rating 3/10: The only major difficulty is walking through a crowd who stop to ask for photos every five seconds. No trouble or strife for either pet or owner. 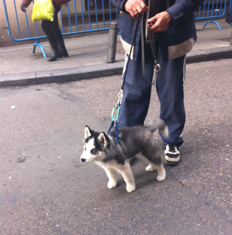 Despite some stiff competition, this is probably one of the cutest dogs I’ve ever seen.

Was it difficult to bring him here today? A little, he has a lot of energy now and he’s very curious about everything. You’re right as well about him being cute, people stop and ask for a photo all the time.

Just today or all the time? All the time! People are always stopping me in the street and asking if they can stroke him.

Is that annoying? Well not when the person speaking to me is equally cute!

Difficulty rating 1/10 or 9/10: This depends if you’re single or not. Trouble would arise if a walk round the block took half an hour.

After taking everything into consideration I believe that my initial skepticism about bringing a cat was justified. Although Ana claimed her pet enjoyed the social aspect of the day out, this seemed to be her opinion rather than the cat’s. Also as the standard method applied for getting cats to the church was grabbing them as firmly as possibly round the neck, I don’t think it would be a particularly pleasant day and that’s just if you managed to hang on to your cat for the duration of the blessing.

The other pet owners, whilst they may have some trouble getting their animals there, did seem to genuinely enjoy the social aspect of the day out and this was complemented by them having animals which are social, or at least fairly social in the case of the ferrets. However for the most trouble free way of enjoying the day I recommend simply going yourself, it’s the only time of year when you can simply walk up to a stranger say hello to them and their dog in a completely problem free manner.

This article is part of the “Little Troubles and Strife Series” of articles commissioned by Stubble and Strife. The articles look at the strife experienced in life and the people around the world trying to fix it. Join the newsletter to get more in the series.

David is a freelance writer and translator who recently joined Stubble and Strife to write on the “Little Troubles and Strife Series”. David lives in Madrid, and has his own website at https://theonlydavidbrownintown.wordpress.com. You can also follow him on Twitter @onlydavidbrown